THE POLICY OF ATTRACTING FOREIGN DIRECT INVESTMENT IN MOROCCO

Foreign Direct investment (FDI) is an important factor in increasing the development and growth of the economy for many countries. In Morocco, foreign investment remains discreet even if it puts the country on the top of African continent. Compared with international FDI flows of around USD 1,297 billion [6, P. 29–30] which is 54% go to developed countries, they represent only 0.3 %. But in Moroccan they are significantly far from marginal since they represent 11% of national investment and 3.1% of GDP [6, P. 32]. After the formation of the protectorate system in Morocco by the government the first foreign direct investment funds appeared at the beginning of the twentieth century. Since then, these flows have experienced ups and downs, depending on political and economic factors, and these investments have affected different areas of activity at different levels. Therefore, variety of policies and measures are carried out by the Moroccan government to reinforce the country’s attractiveness regarding FDI.

In this paper, we will describe the major policies and measures adopted by the Moroccan government to enhance FDI attractiveness strategy. For the analysis, we used text analysis from the reports on monitoring the economic situation in Morocco in the period 1970-2019. The main source of the research information base is the Ministry of Economy and Finance Kingdom of Morocco, the Office of the High Commissioner for Planning (HCP), and various articles, and journals.

Foreign direct investment in Morocco current form has existed since 1970s, but it was only at the beginning of 1990s the Moroccan Administration started the procedure of privatization and transition of external debts into investments, that their flow began to manifest itself. The graph below shows the dynamics of FDI in Morocco from 1970 to 2019 [3, P. 25–27]. 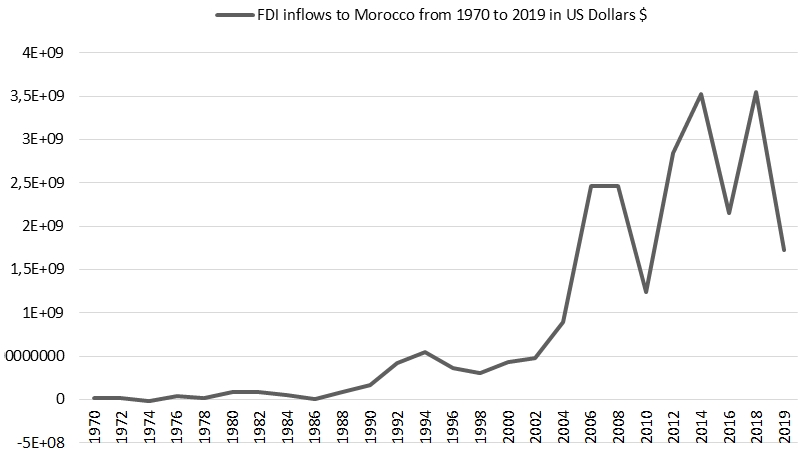 These unsustainable events are mainly associated with the beginning of the privatization process and the conversion of external debt into investment. The introduction finance law in 2002 of the privatizations 16% of the capital of Maroc Telecom and the sale of state blocks of shares such as the People’s Central Bank, the Government of Tabakov and SOMAKA. In 2004, the inflow of FDI to Morocco was mostly noticeable by the sale on the stock exchange of 14.9% of the capital of Maroc Telecom, which is part of an agreement authorizing Vivendi Universal to obtain an additional 16% of this group to become the leading shareholder of the current operator of the Moroccan Kingdom with 51% shares [2].

Moroccan internal financing as a developing country is relevant to sustain sufficient growth for present and future generations. Consequently, the Moroccan Government are realizing several strategies and measures aimed to improve the country’s attractiveness for foreign investment. This obligation was implemented in legislative, institutional, organizational, financial, and fiscal measures adopted in the period from 2002-2020.

The restructuring of the legal and organizational services in business environment performs an essential role in enhancing the Moroccan image and boosting the Moroccan economy. The main Moroccan Administration strategies taken in this area were:

The Moroccan Government has ensured an interesting tax base and financing system to motivate international investors to invest in Morocco. These involve the implemented measures:

The Moroccan Government has chosen to engage in international competitions to accelerate its development and to accompany this strategy the Moroccan Government established an active policy pursues the goal to attract new investments, growth vectors and employment. This obligation has been accomplished via multilateral and bilateral measures:

As part of its strategy of external openness, Morocco has concluded free trade agreements with many countries to promote investment and trade development. These agreements create favorable conditions for the development of a genuine partnership so that to strengthen relations and cooperation in several areas with the countries concerned and, consequently, contribute to the integration of the Moroccan economy [3, P. 26–29].

The strategy “Emergence 2009-2015” focused on stimulating industry, was concluded in a program contract that mobilizes and coordinates the actions of the state and economic operators to create a strong industrial sector. The new industrial strategy called “Industrial acceleration plan for 2014-2020”, builds on the achievements and maintains leadership in the world professions of Morocco, as well as integrates other classic channels of the national industrial fabric, such as textiles and leather [5].

The energy strategy is based on a long-term vision, the purpose of which is to ensure the country’s energy security by diversifying national energy sources using alternative energy sources. It also aims to ensure broad access to energy at competitive prices and the appropriation of advanced technologies that contribute to the accumulation of experience, as well as to preserve the environment, safety, and health of citizens [9, P. 30–38].

The most important link in the supply chains of foreign trade, the ports of Morocco are an important lever of development, the effectiveness of which plays an important role. The new national Ports Strategy for the period up to 2030 aims to support economic changes by forecasting the demand for port infrastructure and further integrating Morocco into global competitiveness [9, P. 52–57].

The purpose of this article was to analyze the actions, measures and policies adopted to enhance the attractiveness of Morocco. The reorganization of the business regulatory environment has played an important role in ameliorating the foreign investment attractiveness policy in Morocco. Indeed, the services provided like the assumption by the Moroccan government of part of the costs of training, the establishment of infrastructure and the acquisition of the necessary land have improved the image of Morocco in relation to foreign investors.

Certainly, the establishment of such a regime can be a way to boost competitiveness and attract more foreign investment flows into the Kingdom of Morocco. In general, competitiveness is not just about the exchange rate regime, but it also relates on many structural factors, such as the quality of institutions, the development of infrastructure, the efficiency of the market in allocating factors of production (labor, capital) to their most efficient uses, the development of the quality of the education system and technological innovation.

The results of our work show the positive effect of the strategies and measures taken by the Moroccan government to attract foreign direct investment over the past 20 years which may be interesting for other authors.

Загрузка...
Просьба поделиться этой записью
Share with FacebookShare with TwitterShare with Google+Share with WhatsAppShare with LinkedIn